Giving back to the community.

One of the central themes behind TeamUp is that by helping someone else you not only improve the other person’s life, you also improve your own in the process.
– David Baukol, Director, School of Hope Foundation One of the central themes behind TeamUp

Due to the Myanmar’s civil war thousands of Shan and people of Myanmar’s other ethnic minorities have fled their homes to escape forced labour, poverty and danger only to find themselves as non citizens on the Thai border. The Thai government does not recognize these people as refugees so they have no rights or access to basic services and are forced to work often in exploitive and unsafe conditions just to survive. Parents are often unable to look after their children. Or even worse, they’ve died and left their orphans behind.

These children often lack basic necessities such as food and clothing. And without ID papers they don’t have rights to education and medical care in Thailand. Furthermore, they are at high risk of being exploited in human trafficking, the sex industry and drug trade.

One of the central themes behind TeamUp is that by helping someone else you not only improve the other person’s life, you also improve your own in the process. This philosophy lies at the very heart of what we do and it’s fundamental to our mission in making the world a more conscious place. We are very fortunate to be based in the beautiful city of Chiangmai in northern Thailand. Any of you who have visited here will know exactly what we mean. But being close to the border with Mynamar has also made us mindful of some of the very real hardships happening on our doorstep.

A Better, Brighter and Safer Future

In 2003, the Schools of Hope was set up to help orphans and impoverished children along the Thai-Burmese border who would otherwise not have a chance to study. Its mission – to create a better, brighter and safer future for these children. The children have lessons in Shan and English as well as Maths and Cultural knowledge. They even play football and learn how to garden.

In 2009, Brian Bauerle, our co founder of TeamUp, was the first family to support the School and in 2011 the School of Hope Foundation was officially established dedicated to unconditional help for underprivileged children under Thai law. A proportion of your TeamUp coaching fee goes toward helping these children lead happier and more fulfilled lives. 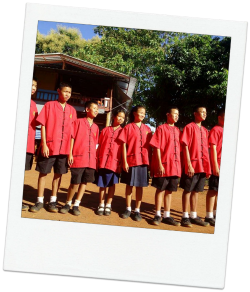